A.-M. Guimier-Sorbets offers a monograph that is alone in presenting the corpus of mosaics from Alexandria. 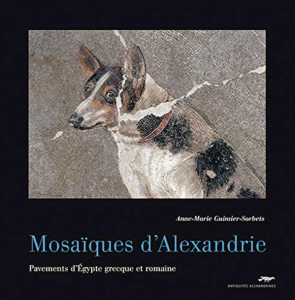 It is a rich synthesis which will appeal to connoisseurs and specialists, but also more widely to a public curious about the pictorial arts of Antiquity. This book is a fine complement to the author’s series of publications on the paintings and mosaics of Alexandria.[1]

The book, in square format, has 259 pages, 12 framed texts, and 236 beautiful illustrations. The synthesis itself, 214 pages, is followed at the end of the volume by an 18-page catalog of Alexandria mosaics, consisting of 63 pavements. This is followed by an appendix detailing the excavation sites of the CEAlex-CNRS projects, a map of the Egyptian sites mentioned in the book, and a table of relationships between the figures and fragments unearthed during the excavations. A complete bibliography closes the volume.

The quality of the photographs and the graphic elements in general is one of the strong points of the work. The text is abundantly illustrated with photos of the full mosaics accompanied by enlarged images of details, as well as images of examples used for comparison. In addition, the 12 framed texts that punctuate the text offer useful summaries in concise, clear terms, which highlight technical aspects, remarkable sets within each corpus, or local idiosyncrasies.

After a brief foreword outlining how the book came together, the author presents an introductory chapter entitled “A quick history of the mosaic.” These few pages offer an excellent summary of the origins of the mosaic in the Greek world, evoking the sources of inspiration and techniques used. The following text is organized into nine chapters, which follow a chronological progression while devoting much attention to technical and iconographical issues. The themes of the chapters alternate between these perspectives in order to respect the balance between artistic technique and thematic content. The first chapter, “The first mosaics of Alexandria,” introduces us to the oldest examples known to date. As at Pella or other sites that have yielded pavements of the 4th century BC, the first mosaics are made of pebbles and present a limited chromatic range consisting mainly of black and white with red or yellow highlights. Mosaicists sometimes used lead strips to improve the accuracy of straight or curved lines. A large body of text is devoted to commentary on the famous “Mosaic of Erotes hunting a stag” from the Shatby district, whose composition recalls that of the mosaic of Pella signed “Gnosis,” and which constitutes the emergence of a mixed technique in which some parts of the work were made in tesselatum. The author does not weigh in here on the debate surrounding the invention of tesselatum because, as she explains, “cette nouvelle technique a pu être « inventée » en plusieurs centres, d’où elle a été ensuite diffusée” (p. 30).

Chapter II highlights the expansion of the chromatic palette of pavements at the beginning of the 2nd century BC. The pavement signed “Sophilos” and discovered in Thmuis depicts a female face, with remarkable quality of execution and a pictorial style that suggests Alexandria’s royal workshops. Without taking a side in the debate concerning the identification of this figure, which remains ambiguous, the author reviews the major hypotheses and places the work in its creative context, explaining both the technique and appearance of the original chromatic range. The second part of the chapter deals with the mosaics uncovered by the 1993 excavations carried out during the construction of the Bibliotheca Alexandrina, which revealed a site believed to belong to the ruins of the palace of Alexandria. Connoisseurs of antique mosaics will recognize this remarkable set, which includes the dog mosaic, the wrestlers’ mosaic, and other fragments. These works crown a phase of mosaic art in which the most sumptuous emblemata were composed in opus vermiculatum. In the close-up photos — published here in a quality that is almost unprecedented — one can finally appreciate all of the remarkable details. Chief among them is the detail of a meander square (Fig. 46) whose magnification allows us to observe the chromatic contrasts and the use of lead strips to guide the placement of the tiny tesserae. Chapter III, “Techniques and styles,” first focuses on the creation of new motifs by the addition of color, which enriches the repertoire with “meanders with swastikas and polychrome squares in perspective,” “cubes in perspective,” “garlands in palm stipes,” among other motifs (pp. 67-69). The gorgoneion, a key theme in Greco-Roman iconography, appears on the pavements, often at the center of a “shield” of scales. The traditional “fleuron” of banqueting rooms is thus enriched by a particularly suggestive figurative theme.

The second part of the chapter continues the reflection on the evolution of techniques and figurative themes in the imperial period and highlights the idiosyncrasies of Alexandrian pavements, in both continuities and innovations. Chapter IV treats “The iconography of mosaics,” presenting successively the mythological themes observed (Lycurgus and Ambrosia, Alpheus and Arethusa), animal representations (mainly birds), and Nilotic scenes, which, as the author reminds us, were widespread throughout the empire and up to the early Middle Ages. If the most famous examples were discovered in Italy (e.g., at the House of the Faun in Pompeii, the Temple of Fortuna Primigenia in Palestrina), there is little doubt that this iconographic theme has its origin in the Lagid world. The author lingers at length on a magnificent 3rd century pavement of large dimensions (4.68 m x 3.54 m) discovered in Thmuis, which depicts the flooding Nile. Again, we appreciate the quality of the description, the recontextualization of the mosaic, and the accompanying photographs with lengthy captions. Chapter V puts the mosaics in their architectural context beginning with baths (Fayum, Karnak), then considers the mosaic decorations of imperial period houses (Birdhouse of Kôm el-Dikka, House of the Medusa of Diana, etc.). Chapter VI deals with the question of “the organization of production.” Various questions are addressed in this chapter: how should we conceive of the organization in workshops? Did they have a permanent space since most of their work was done on building sites? Why are only a dozen known pavements signed? The author then analyzes the techniques of emblema (made in a workshop) and “pose mixte” (an intermediate technique between the installation of the tesserae in situ and the emblema), as well as opus sectile (with the spectacular parietal ensemble of Kenchreai). As is often the case in this book, the interest of the work goes far beyond the specificities of the Alexandrian corpus to address central issues in the study of mosaics with clarity and precision.

Chapter VII focuses on the pivotal period of Late Antiquity, simultaneously observing the pavements made in pagan and Christian contexts. The early establishment of Christianity in Alexandria did not prevent the long duration of the most prized themes of the ancient repertoire, such as mythological figures. Other themes appear transferred easily from one context to another, such as birds, which, as noted above, were particularly appreciated in Alexandria. The author also recalls that in Alexandria, as in Rome or Constantinople, the mural mosaic was a great success during late antiquity whatever the context, from baths to churches. Chapter VIII considers “The role of Alexandria in the history of ancient mosaics.” The author offers here a critical perspective, highlighting the role of Alexandrian workshops in the birth and dissemination of certain themes and techniques. She recalls that Alexandrian workshops worked outside Egypt and bases her argument on the examples of the Nilotic mosaic of Palestrina and those from the House of the Faun in Pompeii.

Chapter IX plunges resolutely into the contemporary era and examines the phenomenon of rebirth of ancient heritage that has been observed in Alexandria since the 19th century. In the urban setting, mosaic walls and the decoration of sidewalks echo the ancient repertoire with both the repetition of ancient motifs and the renewal of compositions, thus demonstrating that the art of the mosaic is still alive.

This book possesses qualities that will satisfy a wide audience. It is addressed both to specialists, who will appreciate the high-quality photographs of some of the lesser-known motifs finally gathered in a single volume, as well as to lovers of ancient art. Finally, the pedagogical qualities of the book remind us that A.-M. Guimier-Sorbets has extensive experience as a teacher: the concision of the chapters, the relevance of the framed texts, the clarity of the style, and the abundance of illustrations all make this volume a precious resource for the teaching of ancient art and a new reference in the field of mosaic studies.